This blog is the digital space where I reside online. This space is open to students, interested readers, and is a place where I share my adventures in reading, challenge the status quo, present ideas, and share new and captivating finds from the field of education and the wider world -- both on and offline.
I ask that if you have private questions to please email me at my University of Ottawa account rather than post here.
Linda

The visual and literacies Trash waveIndonesian surfer Dede Surinaya catches a wave in a remote but garbage-covered bay on Java, Indonesia, the world’s most populated island

Waves of humanitySprawling Mexico City rolls across the landscape, displacing every scrap of natural habitat

‘If our species had started with just two people at the time of the earliest agricultural practices some 10,000 years ago, and increased by one percent per year, today humanity would be a solid ball of flesh many thousand light years in diameter, and expanding with a radial velocity that, neglecting relativity, would be many times faster than the speed of light.’Gabor Zovanyi
Photograph: Pablo Lopez Luz The return of the ancient mariner?
Dead birdOn Midway Atoll, far from the centres of world commerce, an albatross, dead from ingesting too much plastic, decays on the beach – it is a common sight on the remote island

‘Surely the fate of human beings is like that of the animals – the same fate awaits them both; as one dies, so dies the other. All have the same breath.’ Ecclesiastes 3:19
Photograph: Chris Jordan British Columbia clear-cutSometimes called the Brazil of the North, Canada has not been kind to its native forests as seen by clear-cut logging on Vancouver Island

‘Human domination over nature is quite simply an illusion, a passing dream by a naive species. It is an illusion that has cost us much, ensnared us in our own designs, given us a few boasts to make about our courage and genius, but all the same it is an illusion.’ Donald Worster
Photograph: Garth Lentz
Posted by Linda Radford at 08:21 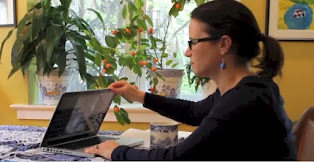 Linda Radford is a Long-term Appointment professor at the University of Ottawa's Faculty of Education and has been participating in the development of its new Urban Education Community program. She currently serves on the executive for the Canadian Association of Curriculum. Recent and ongoing research projects address curriculum policy and renewal, digital pedagogies that foster self-reflexive reading practices, the empowerment of marginalized youth through engaging literacies in critical ways, and education for youth in urban high needs settings. She has published her research in several journals and books, including the Affective Reading Education Journal, Journal of the Canadian Association of Curriculum Studies, Multicultural Education Review, Changing English: Studies in Reading and Culture, among others.

Businessmen drink my blood
Just like the kids in art school said they would
Arcade Fire, 2011, Ready to Start


A great book on multiliteracies

A return to what came before, or, the seemingly unimaginable?